I do also have OpenJDK installed but I switched the default to the sun version and still have the same result.


I've also tried a Windows XP machine and both FF and IE. Not sure of Java versions and machine isn't accessible at the moment.

Many other apps installed but I don't think anything is using the same port. Is there an easy way to check port usage?

When I click on Keepass in the main HDA page the address bar reads https://hda:8443 . I don't recall doing anything to Apache and didn't make any changes during the install. 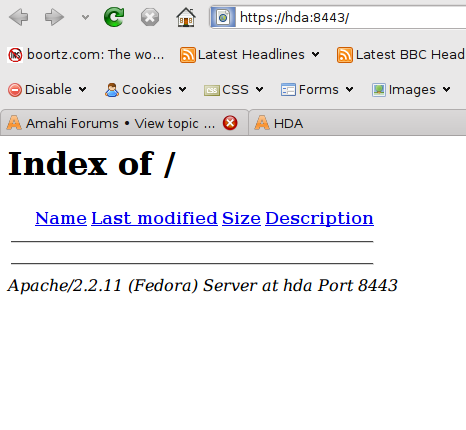 Update your ubuntu machine, you are running an EXTREMELY old version of firefox, to update do:

sudo apt-get upgrade
and let that run until its finished. Then try.
Having problems with connecting to the internet? Try the Network Troubleshooter.

I don't believe Ubuntu updates will bring FF to 3.5 so I did it manually. Unfortunately running FF 3.5.2 had no effect on the problem.
Top

Well, in the newest version of linux distros, they push out the latest firefox in updates as Firefox is the main browser that is packaged with gnome.

Did you run the update anyways? It was not just to update firefox, but flash and other things as well.
Having problems with connecting to the internet? Try the Network Troubleshooter.

System was already up to date.

What about opening the port through my router for a limited time so someone (BK or Bigfoot) who has a known working client could try to access my install? That could at least point us to a client issue or a server issue (although I'm fairly certain the problem is server side . . . but famous last words).

PM me and we can work it out.
Top

I would be willing to do that, if the time is right.

Come by the IRC Channel tonight and get with me, I should be on unless something comes up.
Having problems with connecting to the internet? Try the Network Troubleshooter.